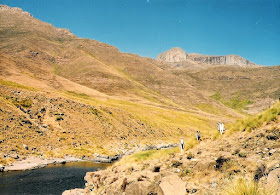 Two out of three donkeys find me quite interesting.

Brother Charles the water engineer used to hear about all kinds of fish opportunities. At this point the Lesotho Highlands water project was still a speculation under feasibility study. The plan was to put a damn on the river, Katse dam, and siphon off Lesotho's water for the conurbation of Gauteng. We thought we'd better go check on the river before anything happened.

For some reason that escapes me after thirty years, Charles had to bail on the trip. Girlfriend, work or room-mate problems, something trivial but no doubt it was important at the time. Access to the river in those days was either a couple of days' hike, or a two-track donkey path up the mountains. My little hatchback Mazda 323 - the Mazderati, also known as Tarzan car (tree to tree) - was not up for that kind of rock crawling. Another engineer acquaintance whom Charles had included, called me up and proposed we go anyway, with the assistance of a kindly hippie he knew in Ficksburg and his bakkie. No decision necessary, the only certainty in my life is to always accept when asked on a trip where fishing might be possible.

Ficksburg is a small farming town in the Free State, with a leavening of poor artists and hippies who like the low cost of living, fine climate, mountains and plains. I travelled there once to run the 23km Ficksburg Cherry Race. The race started early to beat the heat which allowed us to start drinking at 9am under the cherry trees. That's all I can remember about that.

Let us call the engineer Harry, not his name but I don't care to recall it. His girlfriend Annie and kindly hippie friend Riaan completed the expedition. Halfway up the mountains the bakkie was staggering up between the rocks while everyone not driving walked up next to it in the rain, pushing from time to time when the mud seized the bald old tires. Harry looked at me and said, "this is Mazda country !" which was funny at the time.

Pitched camp with Riaan's capacious old canvas tent above the river, a few feet from the road, which enjoyed no traffic at all in the time we were there. We could have pitched on the road itself. That would have been flatter. Some people brought folding stretchers which looked pretty comfortable from my viewpoint on a thin foam gaper pad.

No pictures at all from this trip, only a few clear images in memory. The rain was off and on all weekend, wind and clouds driving over the high peaks. Fish were sparse but perfectly gorgeous when found, deep black-backed bodies and bright ruddy-streaked silver sides. The biggest was 3lb or so, grabbed the fly as a veil of rain swept over the pool, and ran thirty yards downstream before I realized what was going on. Returned with thanks. I wish I could share that picture. Kept two smaller but still decent-sized fish to feed the camp.

Harry had brought a rod but no trout flies so I gave him some of mine. These did not meet his high standards - "give me some of your good flies, these lousy ones keep unraveling". Unwisely I observed that his backcast was pounding the (perfectly good) flies into the unrelenting rocks, several times on each cast. In the end what can you do, offered up a few more sacrificial flies and resolved not to go on any more trips with Harry. This resolution kept, though I do regret losing touch with Riaan.

In the evening Harry and Annie were jumping each other's bones in the tent. Riaan and I took ourselves off to sit in companionable silence at the cherry-wood fire, wood imported from Ficksburg by bakkie at some expense of time and spirit. It was worth it. The rain flurried by as we listened to the music of river and fire.

The next time Charles and I could synchronize our schedules was deep into winter. We had doubts about finding the fish under winter conditions, but as always the best time to go fishing is when you can, so we went. The river was showing its bones. 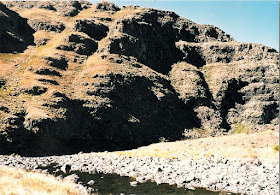 This time we abandoned the car at the road and backpacked further downstream each day, finding no fish. In a few of the deep pools there were cruising shadows like submarines which seemed impossibly big for trout. They weren't actively feeding, just hanging in the current, roundly ignoring everything we had in our fly boxes. Eventually they would tire of being pestered and fade down into the deep green water and rocks. 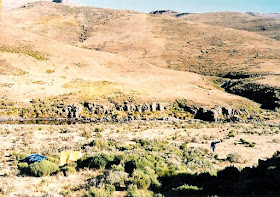 Another day down the river. This was the first and only tent we owned, a good twenty-five pounds of somewhat portable shelter. Each morning the blue flysheet was stiff with frost, in this picture removed to dry somewhat on a bush. No fires this time as there is no wood in the sub-alpine (cf pictures).  The camping was chilly. Morning oatmeal made with boiling water would be frozen to the bowl before it could all be eaten, not much of a loss it is true.

There were herdsboys and flocks of sheep in the hills, sleeping in little stone rondavels. In the morning a thin thread of smoke would emerge first, then as the sun rose the bodies would pile out. We speculated that everyone slept in one promiscuous pile for warmth. The boys were clad in blankets with rubber gumboots. One boy had a pair of fine German leather hiking boots, probably considerably warmer than the standard issue. They were interested and deeply puzzled by us. 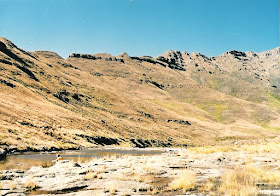 Since we couldn't catch the submarines in the big pools, we tried stalking quietly the smaller pools. No fish seen or surmised. 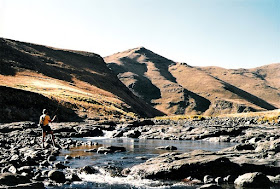 Perhaps they are hiding under the faster water  ? nope. 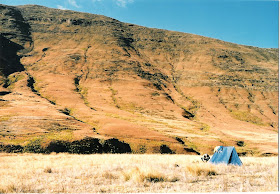 Yet further downriver, still cold and fishless.  Really the trip was excellent but the lack of fish does remove a possible source of happiness, of which there are few enough in all conscience. 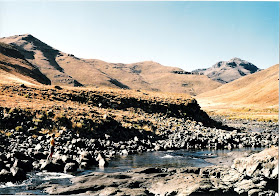 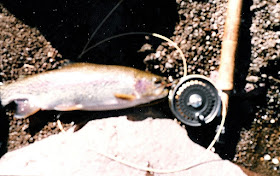 A very blurry photo but that's all there is - I won the fishing, with one fish.. handsome healthy fellow, where are his friends ?

This whole post was prompted by an inquiry from Rex Fey, who went up to the Malibamatso this year on the new smooth roads the Water Project built, and found a seemingly fishless river in winter as well. Yet other reports from warmer times earlier in the year showed quantities of fish. Just what do they do in winter ? Apparently they have been doing it for thirty years now, before and since the dam.

Go to Rex's weblog and read the whole thing, to see more stories and pictures from the high Drakensberg trout streams, so beautiful it could break your fisherman's heart. This trip was the last time I fished the Malibamatso. We left SA in 1990 as my biannual Army camps sent me to doing police work in the townships, roadblocks and chasing gunrunners, couldn’t stand it. Always wanted to fish the Berg streams once more, still dream about them. 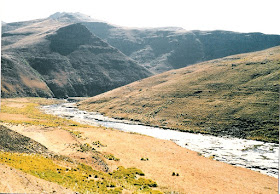 In a big country
dreams stay with you